Hey folks. I’ve been keeping my eye open for a place where a Westerner like myself can get their hands on the Korean-specific “Art Box” switches, and today I stumbled on this proxy service website:

Ships Worldwide. Order now! Archon - ART BOX™ Switches - Give your keyboard a tactile feel like never before with ART BOX™ switches. Only on Harumio.

If you don’t know what these are, they’re normal Kailh BOX switches, but with a different top housing shape and 5-pin bottom housings.

The whole reason these are on my radar is because of that custom housing shape; it’s designed to clear GMK and other low-profile caps when North-facing.

(Incidentally, the shape is much like Kailh’s subsequent globally-marketed Box Silents that cost twice as much but have a different stem and aren’t exclusive to this one Korean company…)

I’d literally just bought some normal BOX switches when I found these, but they’re worth it to me for the top housings alone because of how hard they are to find around here, at least for now - and I won’t mind the stabilizing pins, either.

did you end up ordering from harum.io? i was looking at them for leopold goodies but wasn’t sure how legit the site is. hope your transaction goes well.

Thanks! I did - got the standard email receipt. I’ll let you guys know if the switches arrive as intended or if I run into any issues. 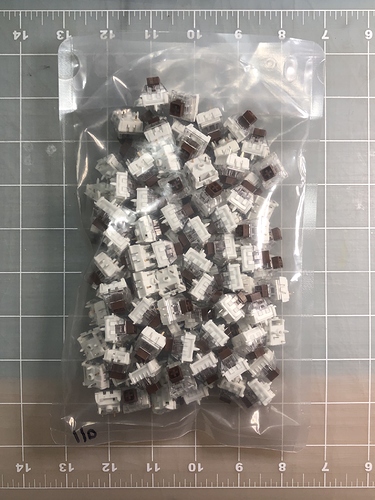 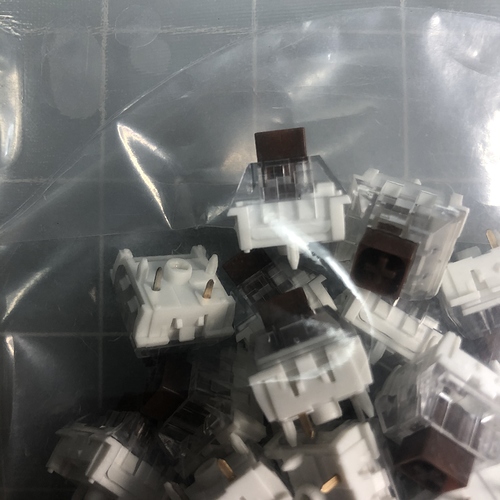 Here they are. @insolentpotato - I’m not surprised they made it, but I am surprised how quick they got here. I got shipping notification within 24 hours of ordering and it only took a few days to arrive - definitely a quicker turnaround than I expected, especially since they aren’t a direct retailer.

that was quick, you’re right. man…if they have topre stuff im dead meat.

Interesting, I had been looking into Korean proxies to source a TFG ART board- they are available on Hansung/Archon official Naver stores for $90 USD equivalent, and after shipping and proxy fees it was going to end up somewhere around $140. Harumio has them now for $154 shipped, which really is not bad.

Fortunately I have a buddy who will be stationed in SK next month who will be able to ship stuff to me much cheaper.

This is insane. I was in a similar conundrum.

I have an XD87 build coming up soon. It’s a TKL, cheap, and the switches are wrong-facing.

I was planning to use Kailh BOX Brown switches + OEM-profile keycaps, because I know that BOX can stabilize OEM without too much wobble.

Now you are saying there is a variant of BOX Brown that can also use Cherry-profile while wrong-facing. Is this correct?

I am rethinking things now, as these switches could be more versatile. Maybe I should get them. Do you know if the stems are more in-spec to MX than regular BOX Browns?

I imagine this is where I would order the switches, the link helpfully provided in this thread.

Ships Worldwide. Order now! Archon - ART BOX™ Switches - Give your keyboard a tactile feel like never before with ART BOX™ switches. Only on Harumio.

Yep - Harum.io is where I got them - they shipped fast, too. I learned about them from a :3ildcat video where they demonstrate how the switches play nice with GMK caps in either orientation.

I’m pretty sure they used the exact same stems as regular Box browns, post re-tool. I’m not an expert on the whole stem-spec issue, but I know they’ve revised the dimensions since that first run of switches that were splitting everybody’s caps and inspired Qlavier’s hilarious sticker design: 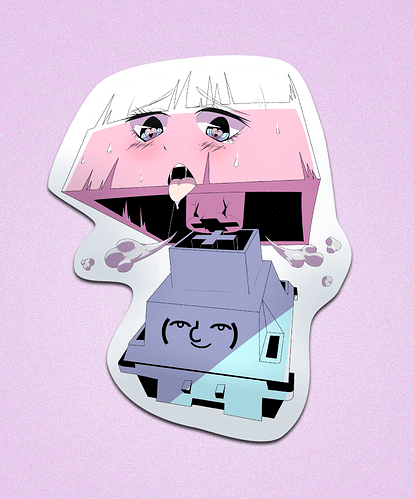 I’m using the Art Box browns right now - they grip the caps a little more snugly than the typical random mx-clone stem, but I didn’t need to force them on and it didn’t feel like they were too tight to me. At this point I think Box switches are safe, but if in doubt this cruciformer tool for shaving the stem down to spec does exist - though it looks like it’s not for sale at the moment.

Oh man, this is really something else. The switches sound great for my needs.

I wish I had known about this a month ago, before I ordered 160 BOX Browns!

I think I will have to pick up the Korean ones now!

Same thing happened to me - I found that site minutes after buying a bunch of regular ones.

I went all in on the Art BOX Browns, and they will be used in an upcoming build.

However, with the ART BOX Browns, I could conceivably use Cherry-profile keycaps with them. Maybe those HK Gaming PBT keycaps, or those ‘Artifact Bloom’ things I’ve ordered from Drop.

So because of the existence of these switches, I’ve changed my build, and maybe we’ll see how these ART BOX switches fare.

Right on! I’m liking mine so far - naturally very similar to regular Box Browns. A cool thing is any regular Box (or Hako) parts will work with these if you ever want to mod them. 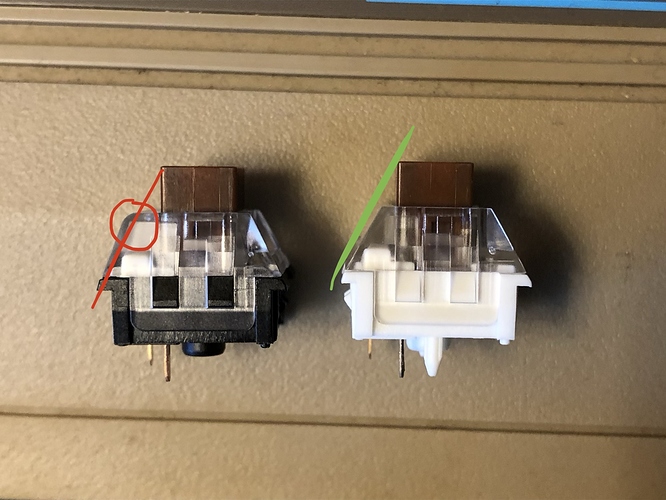 Slapped this image together while explaining clearance to a buddy who wants a relatively inexpensive RGB keeb with Cherry profile caps - figured it might be of use to folks who find this thread via search.

On the left is a standard Box Brown (black bottom housing because they were pre-installed in a black keyboard), and on the right is an Art Box Brown.

The doodley lines show where the clearance issue happens with the regular ones - which unlike traditional mx-compatibles, don’t have any functional parts in that space.

I’ll see if I can provide a photo of the ART BOX switches in the completed XD87, which is a similar project.

Okay, my XD87 with what should be ART BOX Brown switches arrived today: 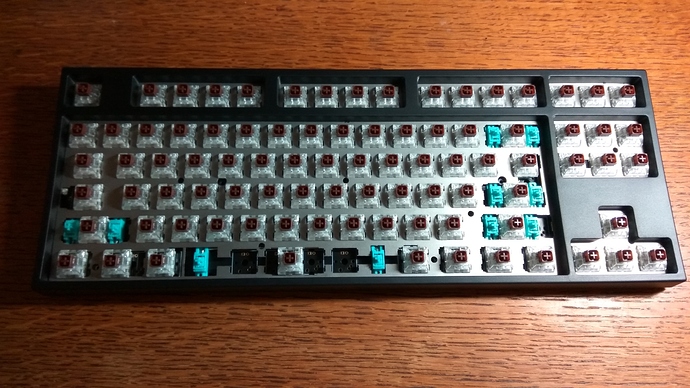 You can see that the stabs are matched to the Tai Hao Pulse keycaps: 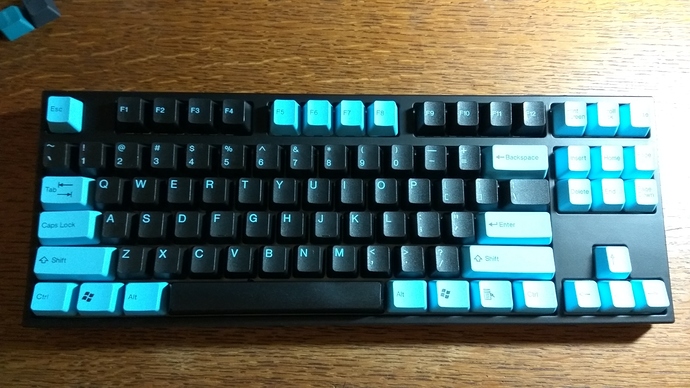 [This was unintentional, but awesome.]

You’ll notice that the Caps Lock key is crooked. I’m not sure if this is BOX being BOX, or if the Tai Hao stem is misaligned. Then again, it could be the board design, as that Caps Lock area looks strange.

With regard to the ART BOX Brown, I did not have the opportunity to test them before the build. They are clearly BOX Browns, and emulate its characteristics. The word “Kailh” is embedded in the side of the upper housing, IIRC.

One difference that I would note is that the ART BOX Browns appear to be a little grittier / sandier than regular BOX Browns. I have a batch of regular BOX Browns from Novelkeys in hotswap, and I would say that those are smoother. Both versions of the switch are very crisp, crisper than Cherry Brown. But I think the ART BOX may have some Cherry-like sandiness.

One thing I would note is that the Art BOX Browns crash down pretty hard on the XD87’s metal plate. It seems harsher than usual. I’m not pressing hard or anything, but these switches do slam. You might want to think about that before putting BOX switches in an XD87.

Can confirm those are Art Box switches; they have the branding on the side instead of the back / front. (Silent Box Browns are also like that, but they have a round stem and only come in the 3-pin flavor as of now.)

I’ve been doing some experimenting with Box Browns and Silent Box Browns today, and I’ve found they do take well to lubing. Hitting the rails and all the lower stem surfaces (below the “box” shape, and excluding the tactile cam) will make the switch noticably more smooth.

(Some Box housings do have dust ejection ports on the bottom, but that really shouldn’t affect lube retention at all, at least when it comes to the surfaces that matter. I’ve seen discussions about those ports where people assume that lubing a Box switch is totally pointless because the lube will just get ejected anyway - and after closely inspecting the small number of parts, I’m gonna say that’s some ol’ shenanigans.)

Like with most tactiles, lubing the cam as well will further improve the smoothness but reduce the tactile weight - however unlike most tactiles, it will also encourage the switches to lightly “click” on the tactile bump as the tiny pusher slips off the peak of the cam. (I believe this would be true of any Box tactile switch to a varying degree depending both on the cam profile and the leaf weighting.)

This could either be great or bad depending on what you want out of the switch - but hitting just the rails and springs with some lube should clear up that textured travel feel.

Edit: About the crooked cap - try sticking another cap on that switch and see if it is similarly mis-aligned. I’ve had cases where the whole switch was rotated a tiny bit, I’ve had others where the switch stem was slightly flawed and twisted (the Box switch thing), and most commonly, I’ve had twisted stems on keycaps.

Yes, there are reports of people lubing BOX Browns with 205g0. Thanks for the lubing tips. I find that BOX Browns don’t always need lubing, but maybe it could vary by batch.

Yes, I’m going to test different caps eventually on the Caps Lock, to see if the keycaps are causing it. I have another set of Tai Hao here, for instance.