[IC] the Heavy Grail: a Norbauer housing for the HHKB

I have been working on an aftermarket upgrade housing for the HHKB for well over two years. It’s by far and away the hardest technical challenge I’ve ever taken on: hence the name. But, after hundreds of hours in active research, prototyping, and testing (and nearly $40,000 in R&D costs), I’m happy to report that I’m just weeks away from a group buy. The injection mold for the switch plate is nearing completion, and I’m just waiting on that so I can shoot some typing tests.

My philosophy for the project

I’ve had many forks in the road on this project where I could have chosen the easy and affordable way to solve certain technical problems. To those who follow my work, however, it’ll come as no surprise that at every turn I’ve always taken the other path. My goal on this project has been to try to create the ultimate answer to the HHKB problem.

The philosophy articulated above is why I opted to create my own injection-molded plate, which is an admittedly quixotic and ambitious strategy.

The HHKB is an unusually technically challenging aftermarket housing to make for a Topre board because, unlike all other products I’ve made in the past, the plate from the OEM keyboard can’t be separated from the housing and removed, because on the HHKB they are a single inseparable piece of palstic. This requires re-making our own custom plate that as closely matches the original as possible (to give that characteristic dampened typing feel of the HHKB) while also being something that can be fit into a custom metal housing.

Previous attempts to solve the problem have tried to re-make the plate from milled aluminum, either fully milling all the slider housings (which is fantastically expensive and reportedly leads to a keyboard with gratingly awful acoustics), or using a metal plate with pop-in sliders harvested from another Topre keyboard, which doesn’t create the same dampened typing feel as the HHKB’s resin plate (and also requires a second sacrificial keyboard).

My plate is made in the USA in production steel tooling by a factory that specializes in ultra-precision medical parts. Working with a company with these capabilities proved the only way to get a super glossy finish on the intricate (and deeply recessed) slider rails, which my many experiments showed to be essential for a smooth typing experience (since those rails serve as a mating surface against which the sliders move).

Below are some quick renders, simulating the housing in my K2 finish. (Alas, the plate won’t actually be pink–most likely white–but I thought it would be fun to render it this way and help it stand out against the housing) 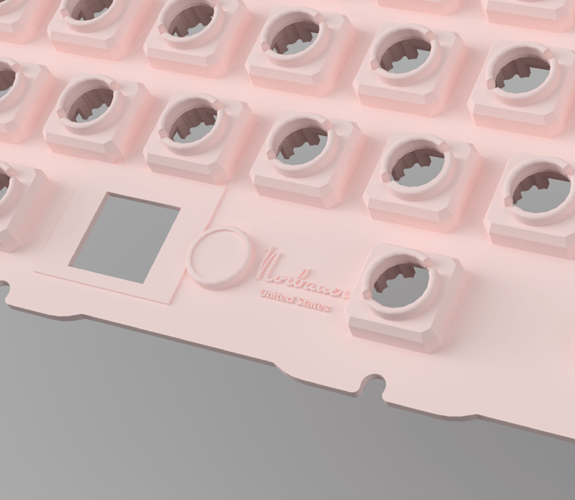 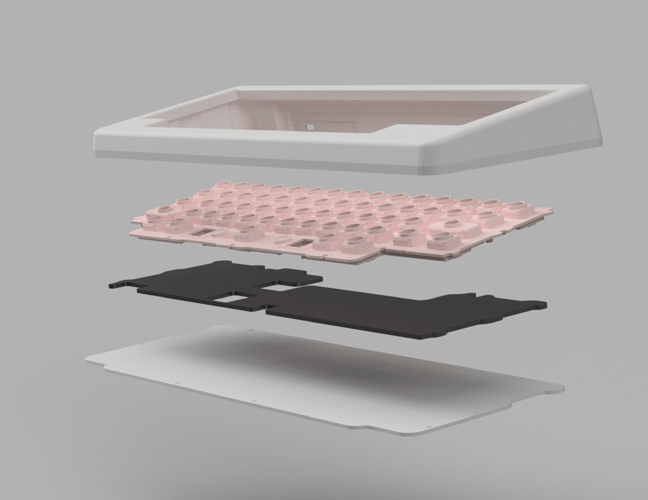 Any and all thoughts and questions are welcome.

Was really hoping $650 was for the more premium finishes when I saw the original post, oh well 1k in AU by the time it ships.

I haven’t announced any finishes.

I guessed that aerospace would have been like aero grade alu with minimum coatings sort of like your veracity steel option for the norbaforces?

I’m really liking the rounded edges and how elegantly the PCB will be incorporated into the design.

Love that this has the slope from the Heavy 6! Will it also have the Norbauer stamp on the back side?

I mean… this is absolutely phenomenal and can not wait to throw down money for it. However, will it run an aftermarket controller? In the OP, you mention that the only thing transferred are sliders and domes which makes me think yes to an a different controller? Will this run QMK for us plebs who love the flexibility of our HASU controllers?

Love my Norbaforce and touch, can’t wait for this. Thank you for everything you do for the community

Mind blowing. I guess I need to buy a HHKB now.

I guessed that aerospace would have been like aero grade alu with minimum coatings sort of like your veracity steel option for the norbaforces?

I’m focused on textured powder coats right now, but I may also offer a Veracity Steel version if enough people are interested.

Love that this has the slope from the Heavy 6! Will it also have the Norbauer stamp on the back side?

I don’t plan on adding a logo badge on these. I’ve kind of come to regard that characteristic side profile geometry that I use often as a kind of subtle branding in itself.

I mean… this is absolutely phenomenal and can not wait to throw down money for it. However, will it run an aftermarket controller? In the OP, you mention that the only thing transferred are sliders and domes which makes me think yes to an a different controller? Will this run QMK for us plebs who love the flexibility of our HASU controllers?

Hasu seems to make controllers in such a way that they just have the same profile and mounting points as their original breakout boards, so I would expect it should be an easy swap with this just as on the HHKB itself, unless it relies on accessibility of the USB hub ports. I’m blocking those for acoustic and visual-aesthetic reasons on my housing.

My housing will still rely on the main PCB and breakout PCB of your HHKB. That was sort of implied, but apologies for not calling it out explicitly.

You have to drill the 2u and larger housings to use MX caps, right? I’ve never done it, but I think I remember that correctly. Any thought on leaving holes there for people who wish to us MX sliders? I really just want you to elaborate on the cool Topre caps you’re designing

Hoping for a retro fridge in this one, but I bet you have something else cool in store as well.

I don’t plan on adding a logo badge on these.

Your badge is the classiest branding I’ve seen on a board though.

Any thought on leaving holes there for people who wish to us MX sliders?

I decided not to, though I did consider it. But you can always manually drill it like the HHKB itself if you want to go that route.

I recently joined a team of awesome guys who have been working on this project for a year or so. I’ve been working with them on refining the technical aspects of their molds, and I believe I’ll be designing one of the first two sets we’ll be releasing.

Still a decent number of logistical things to work out, but much progress has been made already. Some other amazing options are in the works, but I probably shouldn’t say too much since I haven’t asked the other guys what they’re comfortable with me sharing. I’m hoping we’ll have something to offer before the end of the year. If everything comes out like we’ve planned, I’m pretty sure we’re going to blow everyone’s mind–even now just thinking about the possibility of it potentially working has that effect on me.

Your badge is the classiest branding I’ve seen on a board though.

Interesting. I honestly hadn’t thought too much about it on this board. I’ll meditate on it.

I want to be inside that club so very very much.

IC filled out. This was the excuse I was looking for to get a HHKB! Cheers

This looks amazing. I’m just really sad that given the current situation I’ll probably just be able to enter an eventual R2. Will be looking forward to that moment. Amazing Work!

What’s the difference between the Pro 2 / Pro 3 versions?

At least as far as my housing is concerned: just the size and positioning of the USB port, along with the locations of standoffs for the breakout PCB in the rear cover plate.