Thanks! I did try Walker’s mod – at least in principle. I used some substitutes from parts laying around, and it didn’t work well enough. To be honest I don’t remember the details, but at the end it was too much fiddling around for not really sufficient / persistent improvement, so I decided to fix/ mitigate it at the source so to speak.

@MKUltraCorp thanks for mentioning the new Mill Max sockets! Last year I ordered more 0305s than needed, “for future builts”, which now no longer seems to be a good idea…

These are an absolutely new concept to me. It kind of sounds like they don’t even need to be soldered in?

The type I’m talking about have no lip at all, and I’ve seen a couple different methods for installing them. This guy applies a blob of solder to the pad and sucks up the excess, leaving pretty much just a film. He then puts in the socket and heats it against the pad with the iron to set it in place: 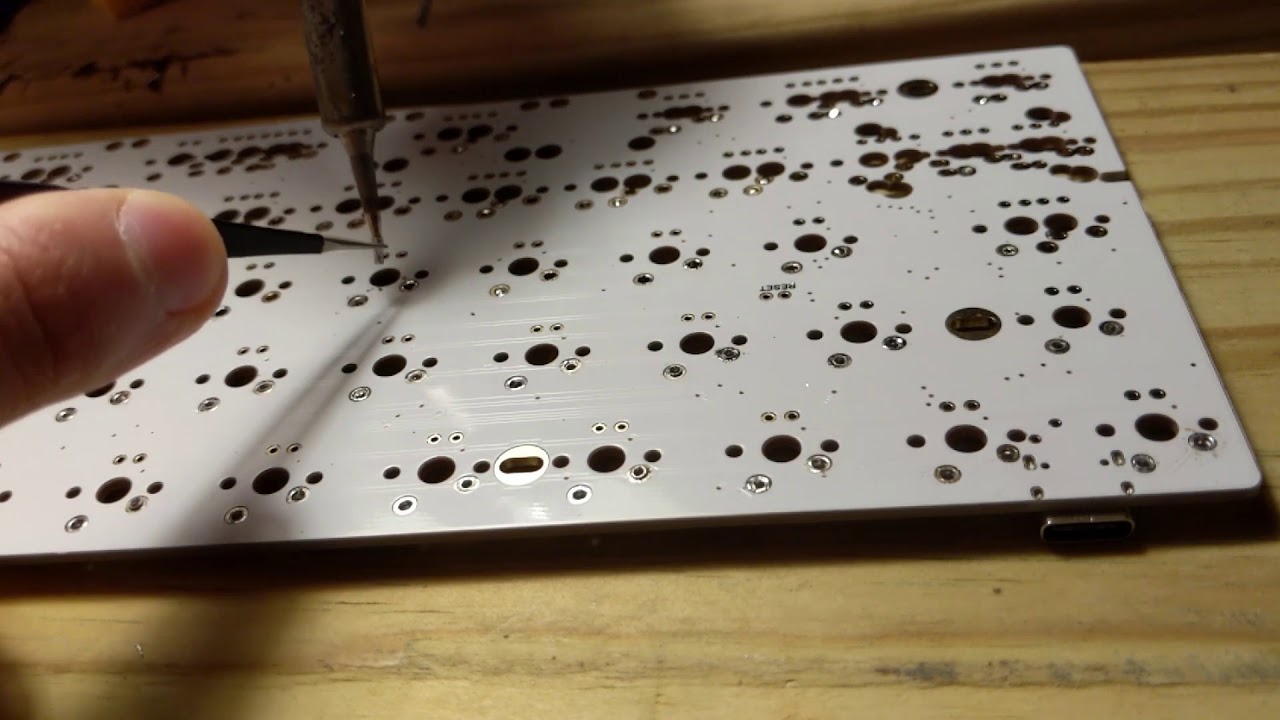 Oh wow, I dig that a lot. I brought up the specs on the sockets and was reading through it and it really doesn’t indicated that the soldering is even necessary. I believe the intent is for the socket itself to be friction fit.

The added bonus is that these sockets appear to be suited for rectangular IC legs, which would be ideal for the switch legs. 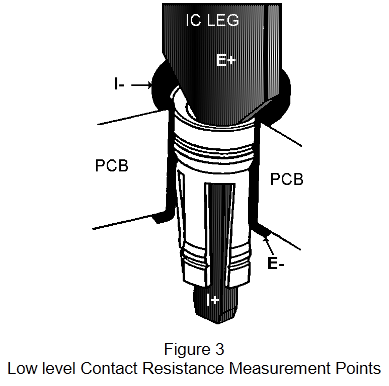 Time to figure out how to source them.

I believe the intent is for the socket itself to be friction fit.

This is only true on some PCBs though. Out of the gate, not every PCB is compatible, hence why the blob and remove method is suggested. Somewhere out there, there was an old spreadsheet that listed the PCBs that were compatible with holtites. It is out of date now.

Good to know, thank you. I saw the prices at TE and they’re really not a lot better in terms of cost than the Mill Max options. Unless the lip of the Mill Max causes issues, in which case these would be ideal.

Soldering really wouldn’t be a bother for me. I just liked the idea that I could pop them into the PCB hole and say, “job done!”

Aren’t holtites a two part socket where one part stays in the pcb, the other goes on the switch legs, and you essentially have to put the switch side one on all the switches you intend to use in this way? I also remember they were pressed into the PCB with a soldering iron tip, and that they wore out quickly. I could be way off, but I know that I was very disinterested in using them (and initially mill max as I didn’t realize that they weren’t the same thing).

I have a love hate relationship with holtites. Mill-max are mechanically better but they sit higher. Currently using holtites because they can sit flat on the PCB. I solder them in using the technique below.

If the PCB holes are too large I fall back to the video @Deadeye posted that helps to reduce the diameter. It doesn’t happen often but if the board is too tight you can using the soldering iron tip to push it in. 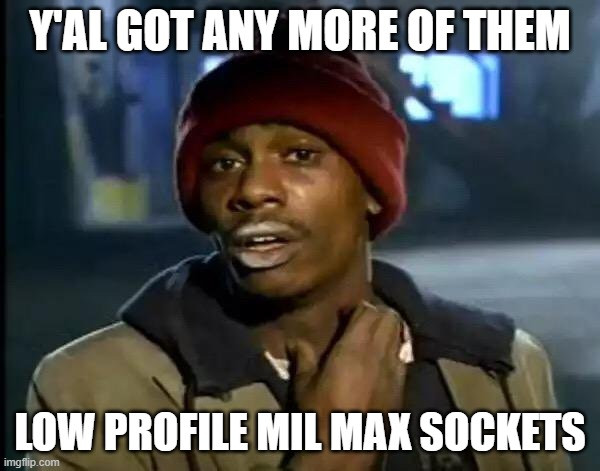 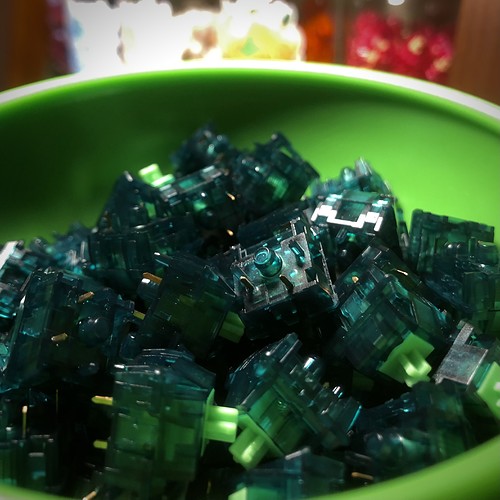 Added a little sticker to F and J keys, as the existing bump was a little too unnoticeable 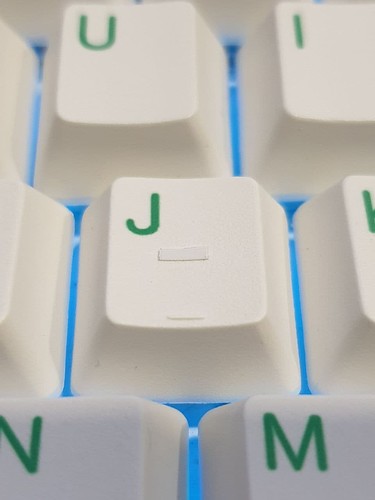 How the lightwaves feeling properly lubed? I recently got a batch of the V2s & was happily surprised at how they felt. Everyone kept saying they feel like silent switches on bottom out due to the dampening legs on the stem it self. Although IME it does take a small bite out of of the bottom out clack, but nothing like switches with actual silencing pads. Then they are very smooth & stable to make it even better! Thinking I might put some shorter light springs in mine, lube them up as usual, & use them like that.

Although IME it does take a small bite out of of the bottom out clack, but nothing like switches with actual silencing pads.

Totally agreed; I wrote something pretty similar in the script I finished last night for the video review I’m doing on these.

I’m loving the way they feel lubed. I’m a little too shaky to type accurately with speed switches like these, but they sound and feel very nice with lube. (I used 106 for mine.) Sometime this week I’ll have that video ready; it’s got a comparison sound test.

Desoldering 150+ Amber Alps… I really, really hate desoldering. Every time I do it I think “never again.” 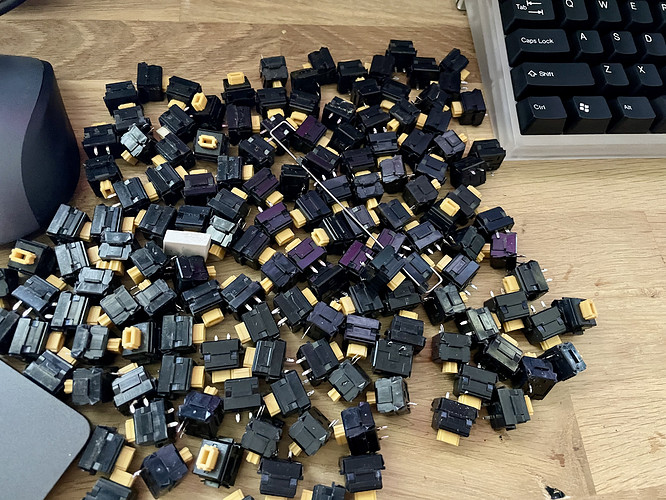 It’s those “never again” feelings that finally pushed me to get one of these:

Same! I got the FR-301, not quite as industrial as the FM-204 station, but man has it saved me about a thousand headaches so far…

Did they sell out really fast or…

Mill Max Factory shows them as being in production.

Mouser has a tiny quantity on hand of the mid-length, 3.3mm version (63 at time of posting).

The paw macropad has been my nemesis since it came in…

The default firmware was flaky with Bluetooth. The recommendation was to get a specific fork of QMK to compile firmware. It became a battle of wills. I eventually got it but it took me 5+ hours. I couldn’t for the life if me get it to compile in Windows and had to I had to use Ubuntu.

I am happy to get the firmware on the macropad. It is much more stable then the zmk version. Though it is still sometimes laggy and disconnects. I will mess with some of the Bluetooth configurations next to dial that in. From my experience Bluetooth on Windows has always been subpar compared to Bluetooth connections on phones.

Regular QMK is way easier even if you compile it yourself. Made me realize how much heavy lifting the QMK configurator does, will try not get as impatient when seeing the spinning potato next time.

Finally going to build out the Maja today.