KTT Mallo’s are based off of the loved (or hated) Peeps marshmallows! Bringing the community a rich premium light tactile feeling switch.

I ordered some because Dangkeebs has some of the best stickers ever and I figure it’s worth it to me even if the switches are meh.

Looking forward to hearing your thoughts.

BFCM purchases has put me on pause for a while.

Very curious to learn more about these.

Obv. I don’t have mine yet, but if anyone else is wanting to pre-order them, AlphaKeys has them running 10 for $2.50 and with a choice of two different spring weights.

By purchasing this product, you acknowledge and agree to the terms in our Group Buy and Preorder Policy → Pre-order runs until limited supply is sold out! Estimated to ship in December 2021 The KTT Mallo are based of off the loved...

Ahh, missed the Canadian Alphakeys pre-order. Too bad, these switches are so cheap. 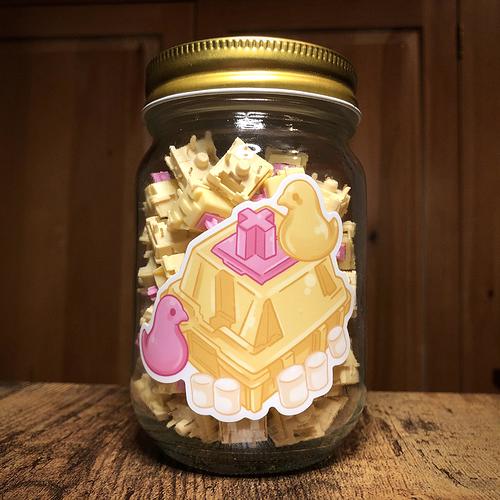 I’ll be installing these in my work board tonight, and I’ll let you know what I think. In-hand I like the bump but do hear some ping.

These are my first KTTs so I’m curious there as well - and I love the sticker, of course.

I’m impressed so far. I don’t hear much in the way of ping in this board, and they feel great.

I had to adjust my typing style coming from some heavier linears, but these are my favorite stock mild tactiles so far.

I’ll be using these daily for a bit, so I’ll add details as I find them.

im just waiting on my order from them >.>

Yes, this is very interesting.

How would you say they compare to MX Brown / Zealio V1 / Durock Medium Tactile on that spectrum [or Star Purple]?

I’d also be interested to know how you lubed them, as they come factory unlubed.

Haven’t done any lubing to them yet myself - the factory job is above average, at least compared to what I’m used to seeing.

vs MX Brown - sharper, more pronounced, higher up - but not extremely so in any case. I actually haven’t tried Zealio V1s or Durock Med Tactiles yet, but I’ll compare them with Pewters and Taro Balls sometime soon.

Specifications say that they are factory-unlubed, so if they are still operable, that is saying something.

I’m familiar with Pewters and Taro Balls, and those should provide a good basis of comparison for a lot of people here.

That’s right, they do say that, don’t they - I could swear I heard some tackiness in there but I’ve been wrong before. I’ll pop a couple open tonight when I get home and see what I can see in there. If they really are dry I’m even more impressed with how they feel. 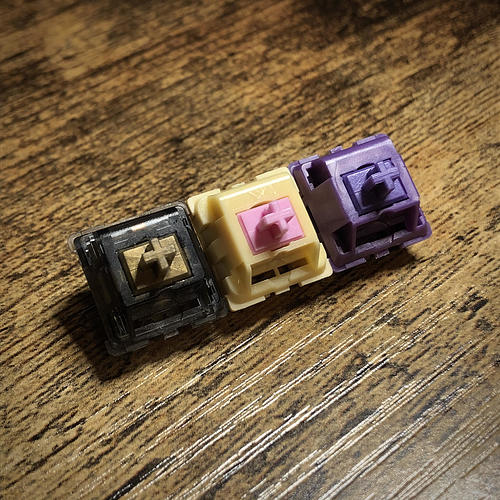 Alright! I cracked one of these open and took some photos.

And would you look at that… 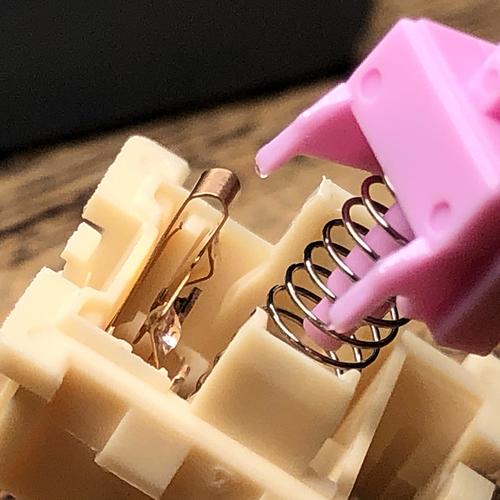 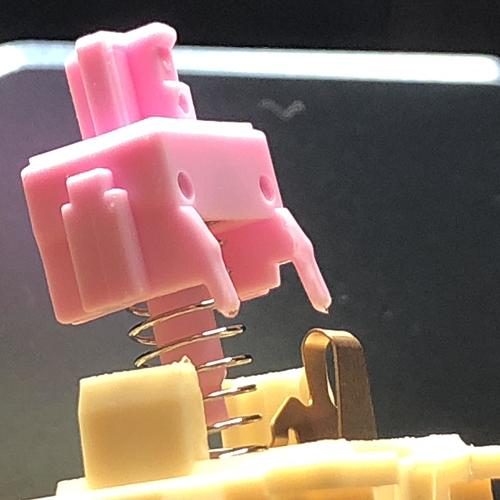 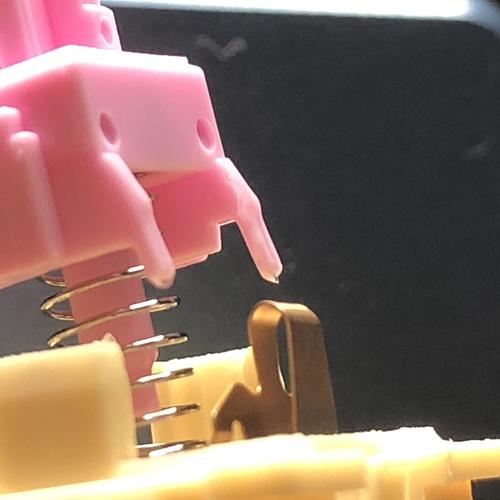 A surprised spider with a bit of lube on their fangs, that is. From what I can tell the rails and such are dry*, the spring is dry, but the leaf and contact legs are greased.

I thought I heard that.

*Edit: actually it looks like there’s a tiny bit of lube on the rails, too.

Definitely not exhaustive, but hey. First I’ll take the tops off (woo!) 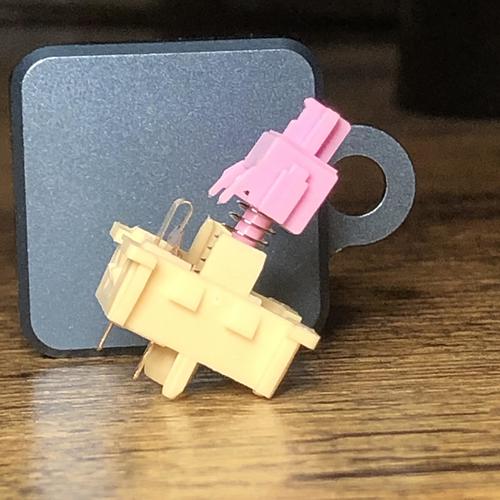 Next is the Taro Ball - I was surprised to see just how lubed these are from the factory - the stem is basically covered in oil. There’s still a good bit of ping, though. 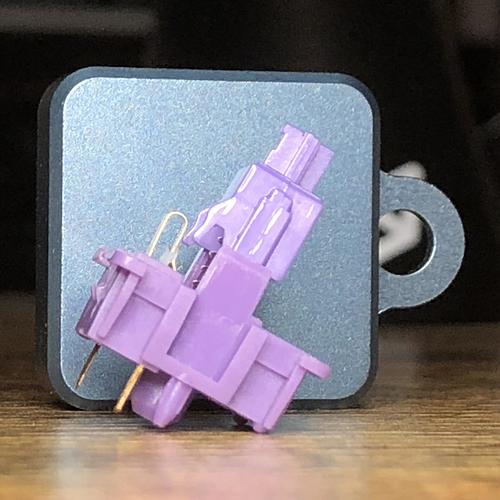 Then there’s the Pewter - this one comes from a batch I bought second-hand; they were supposedly all stock but I found some lubed and filmed ones in there, so it’s hard to say if the traces of lube I found in this switch come from its neighbors in the jar or from the factory. 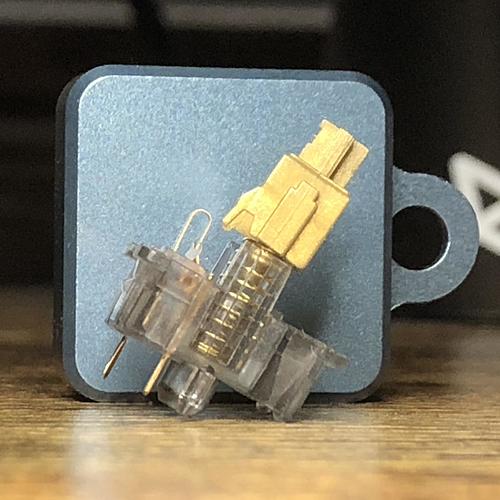 This photo shows the stems from above, and highlights the barely-extant stripe of sheen on the Pewter stem: 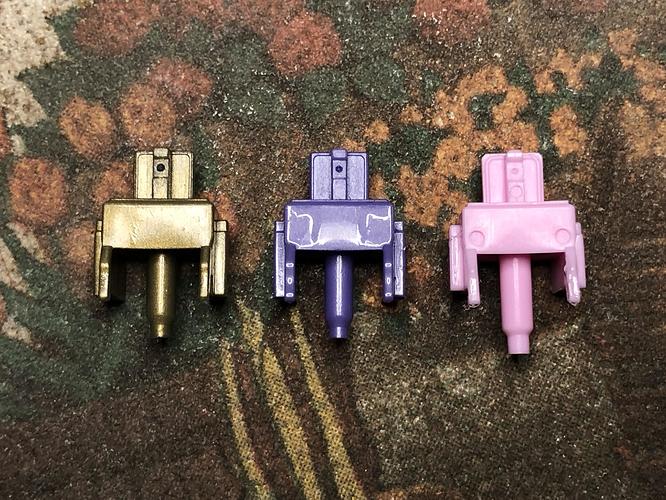 A view from the side: 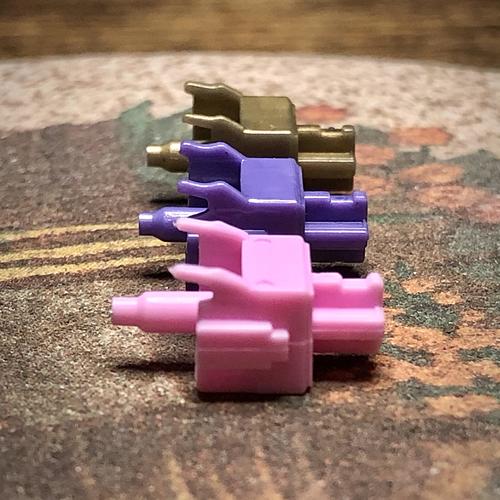 And a bit closer, directly comparing the Mallow with the Pewter: 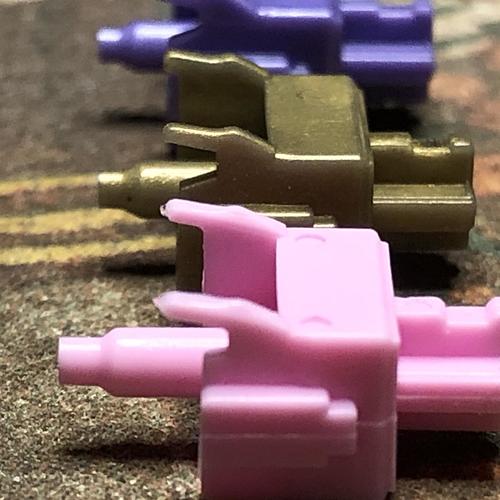 They appear to have a very similar bump, with the Mallo having a longer pole - the housings are quite different between the two though. 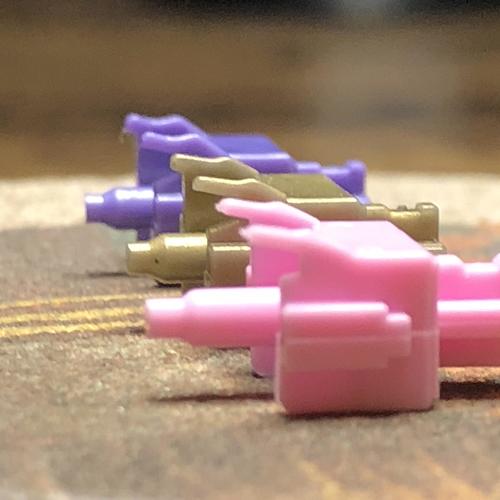 Another angle or two. 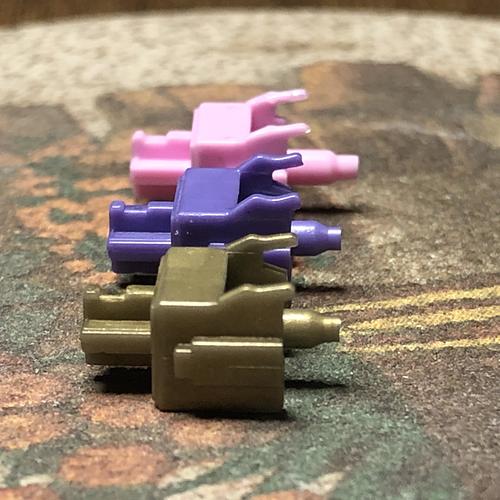 I think I might have to put these in that small but growing category of switches that are quite good from the factory - alongside ACEs, Wilds, *nixdork LTs (and probably regular ones too but mine aren’t in yet), and… well that’s all I can think of. The prelubed JWKs I’ve tried are all excellent in terms of smoothness, but usually need filming or spring lubing.

And they’re pulling that off at checks notes 25 to 30 cents each?

Great write-up. I didn’t even know about the Canadian GB, which is too bad.

I always said that Durock should make a stem in-between DLT and DMT. This may be that thing. Taro Ball is a DMT, by the way, and uses a 65 G spring stock. DMT usually goes with 63.5 G. So it’s definitely going to feel heavier than a 58 G Pewter.

You can make Durock Medium Tactile pretty gentle by using the factory 63.5 G spring and lubing somewhat generously. My favourite DMT switches right now are filmed Mode Signals lubed with 3203. That lube doesn’t do much for sound, but the filming does, so they’re decent, light, and tactile. Best switch for my polycarb MK870, but there’s only 70 of them, so they’ll have to live on my Tester68.

Anyway, these Mallos seem great and I’ve got to figure out a way to affordably get some.

Yep - got mine from Dangkeebs, and I think that’s the one they have. 55 is usually a little light for me but after a few minutes of conscious gentle typing, they felt pleasant and natural. Most of the time I’m ready to move on from lighter tactiles after a couple days, but I think I’m going to use these for a bit.

I don’t know what I was thinking last night. I could have bought 100 Mallos for $25 USD + shipping, but instead I waited and now can’t get them at GB price