Thanks to this thread I have now fully converted my FC660C for the Heavy-6. I used the Niz sliders, JTK sliders for the mods and Axioms 3d printed stabs for the spacebar.

I accidentally didn’t use the smoothest printing material for the space stabs which was an issue I could mostly fix by filing the plungers down a bit. There is still some friction there but with a BKE heavy dome its fine for me under normal usage.
The JTK sliders are a bigger issue, the SA caps fit too loose or sit too low, specially the enter key feels like it can leap off the board if I try hard enough. I used o-rings in the caps to help them sit at the right height but I might try some thin plastic foil on the sliders to tighten them up a bit. They don’t feel or sound as nice as the Niz sliders.

I only received SA Spacecadet about two months ago at about the same time as I received the Heavy-6. It was the last SA set I ordered (fall 2018) since just like many others I had become a GMK fanboi. And I didn’t plan for it but boy, is this a great combination! Despite the 2u mod issues, together with BKE domes and Hasus FC660C alt controller I am very happy with the end result. 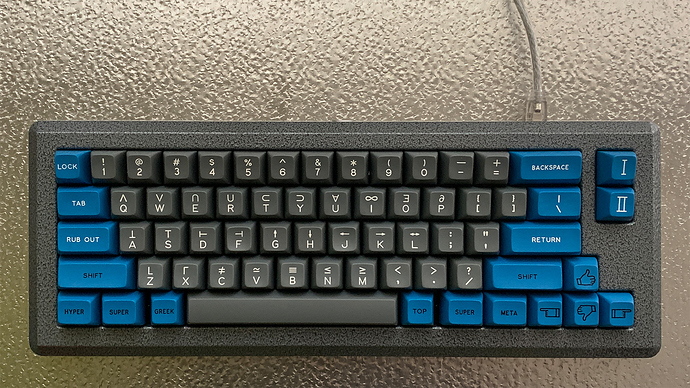 For the mod keys try to hunt down 2u KBDFans sliders, they are very good once lubed.

The costar stabs mods are also great once tunned, including spacebar

I’ve tried to find the KBDFans sliders when I was sourcing all my parts but I had no luck there.

2u costar plus 1u Niz sounds very interesting, should help with a more even feel too. I take it you have done that. Did you need to hot glue the 1u switch to stop it from sliding horizontally in the plate? Could you share a picture?

If you are speaking about the niz housings, no, they slide from side to side but not easy and after you screw the pcb they sit fixed.

Pics of the costar stab mods are here on top somewhere, please dig the thread or read all of it to become an expert :))

Cool, thanks for your replies. There was so much discussion in this thread about the space bar that it didn’t land with me to use the costars for the 2u keys

Time to raise my expertease