95% boards: How do you find the Enter and cursor keys just with your fingers?

On full-size, TKL and 1800 layouts, finding the cursor keys with just your fingers is easy due to the gap around them. But what about 90%/95% boards like the Kira or the Vortex Tab90/Tab90M where there’s no gap around the arrow keys nor between the main and the number block?

On my own Tab90M I replaced the grey cursor keys with yellow ones (both sets came with the keyboard), but without looking I often hit the wrong key. Granted, using a non-sculpted VSA profile (similar to DSA) for such a huge amount of key without gaps isn’t really helping either. I also had issues finding the Enter key easily and not hitting PageDown (right of it) instead.

So I recently exchange the stock VSA Dolch key cap set with the Git kit from GMK Oblivion. Colorwise not a big change as both are dolch-ish. But a big change in the profile from non-sculpted to sculpted.

On the Tab90M, there’s a 65%/75% style column with Delete/Home/PageUp/PageDown/End/Right keys between the main and the number block. But despite all these keys are available in the proper row-profile (R1/R1/R2/R3/R4/R4) in the kit (or at least those kits I purchased), I decided it’s better to have all these key caps except the “Arrow Right” key cap in R1 profile to build up a perceptible “wall” between the main block and the number pad. And on the bottom left of it is the cursor block: 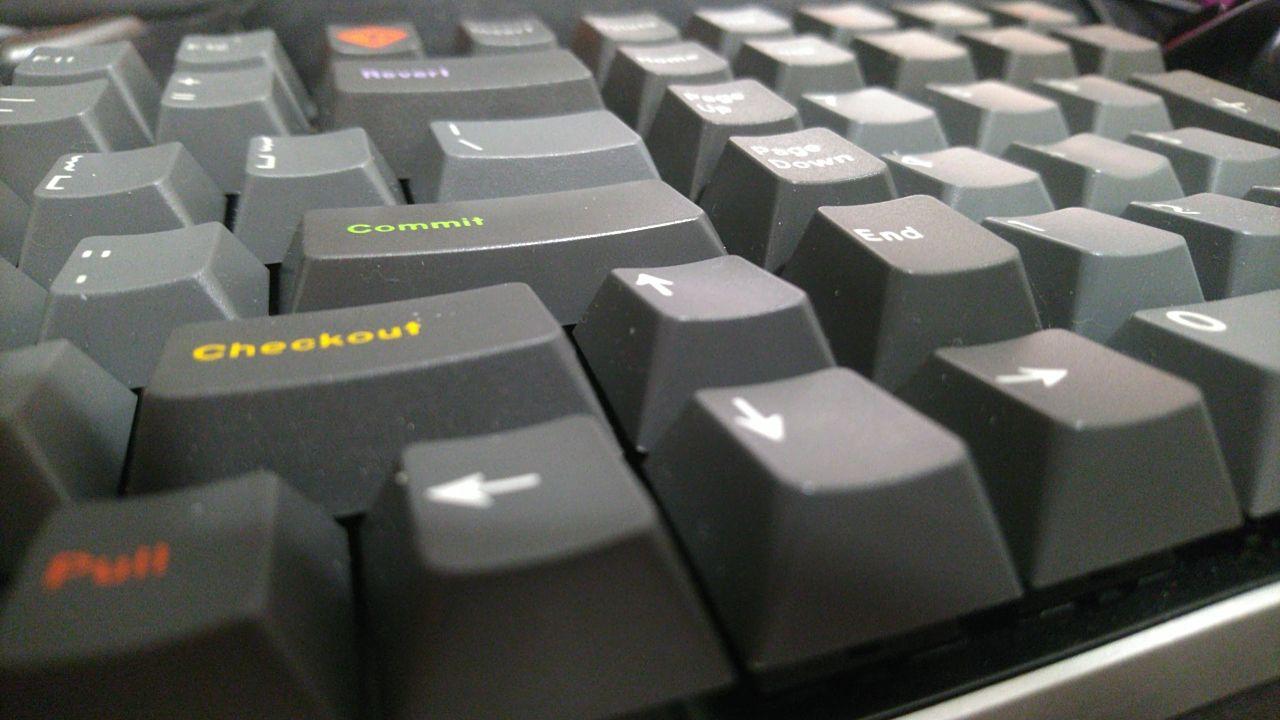 I’m quite convinced that this is a help when navigating with the fingers on that huge keyboard, but then again I still occasionally hit the Right Control (labelled “Pull” in the picture) instead of the “Arrow Left” key. (Maybe caused by being used to the way smaller MiniVan with only one key between the cursor cross and the spacebar(s).)

Anyone else tried to use such haptic walls on huge keyboards without gaps? Any experience with it?

Or are there key cap sets where the Arrow Down key cap either has a bar, dot or is a deep dish key?

Any other solutions to this? Artisans as Enter and cursors keys?

ISO Enter will help you or when in doubt use the numpad enter.

For the arrowkey, use your wall to find the middle of arrows.
Sculpted caps would help you if u can find matching ones.
If it’s possible to open the switches on your keyboard, put a heavy spring in the right control switch.

ISO Enter will help you or when in doubt use the numpad enter.

Two good points. Won’t switch back to ISO, though, for many reasons.

Sculpted caps would help you if u can find matching ones.

Well, that’s what I did.

And yes, it helps a bit, especially to find the proper row.

If it’s possible to open the switches on your keyboard, put a heavy spring in the right control switch.

Also a good idea, thanks. Actually my Cherry G80-2100 (IBM Battleship Clone) uses that trick for other keys near the cursor keys.

Funny coincidence seeing this topic posted. My daughter just received a 75% for Easter, and while working on her computer, I keep mismashing keys when I think i’m hitting return. Its frustrating and I didnt know what the hell was going on for the first couple of fat finger moments. I always use 60%, TKL, and full size boards so this is a totally new experience for me and I didnt realize how much I depended on the gap to the right of the return key to inform my fingers where there were.

I have also given some thought to this, and for me personally I believe .25u blockers or gaps (at least) are the way forward for logical groupings. A blocker, like on @yasintahir’s YAS-62, allows the finger to find the right (or left) arrow easily, much as a homing bump or dish lets one locate F or J. 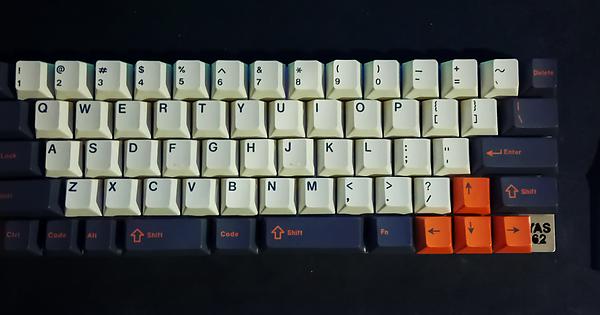 Some layouts have a “cutout” for the nav cluster, with gaps between the arrow cluster and the bottom row/right shift and the numpad, adjusting the numpad zero to single-width and offsetting the arrows 0.25u, and sometimes downwards as well). The one I linked (image below) is my own stab at that.

Another way to let your fingers “do the walking” and find the arrow keys is to put them at the edge, but without filling in the gaps above the right (and optionally the left) arrow, instead putting blockers there. An example of that is the long-awaited and somewhat maligned Matias 60% board: 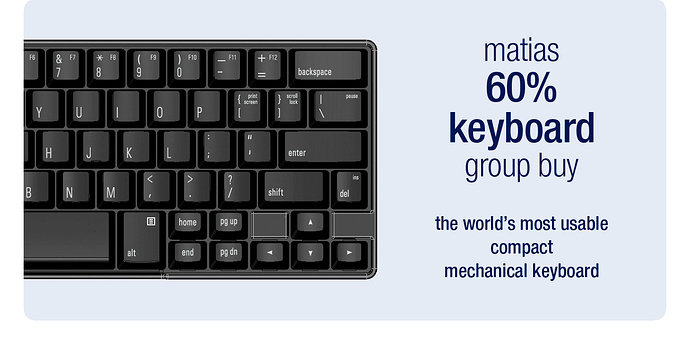 Any other solutions to this? Artisans as Enter and cursors keys?

I’m considering getting these steel arrow keys to do that. I’ll report back on how well that works.

A blocker, like on @yasintahir’s YAS-62, allows the finger to find the right (or left) arrow easily

Yep, the YAS62 more and more becomes my favourite HHKB-layout derivative. Might pass the Tokyo66 at some point, which still has the above mentioned 65% issue wrt. the Enter key for me.

the long-awaited and somewhat maligned Matias 60% board:

Urgs! I really dislike sub-1u keys. And more-than-1u-height bottom row keys! But yeah, that would help, too.

I’m considering getting these steel arrow keys to do that. I’ll report back on how well that works.

I really like the idea of a different material and hence a haptic difference! Before I just considered these steel keys something gamers want for their gamer keyboard to look more martial. Now I consider these something to buy to have an actual use.

Honestly, you just get used to it with time lol

I remember seeing a post somewhere on deskthority or geekhack I think a long time ago where someone was using a teeny tiny dab of superglue and a tiny ball bearing to almost make a homing key on keys they wanted to be able to find by touch, maybe something like that could work on one of the arrow keys?

Indeed, now I vaguely remember having read such a thing, too. Thanks for that pointer! 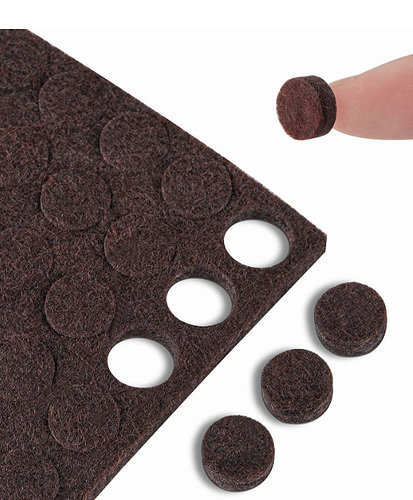 Here they are installed:

Though they’re a different profile (and not deep dish or similar to the black TEX ADA caps, but rather OEM profile), they serve their purpose well; both the change in surface material (they are smooth and cold to the touch) and profile promote @XTaran’s idea of a “haptic wall”.

Is the the part where I say I daily a 96key with G20(a uniform profile) and you just gotta get good?