Hello, it’s been a while since I last posted about a project and only vaguely teased at what I’m working on. Also, Matt3o announced his new profile.

So now is as good a time as ever to share my profile with the World™, too.

Since I see quite a few similarities between Matt3o’s new profile and mine, I’d rather show my work sooner than later. Also, to emphasize that these profiles came into being independent of each other. 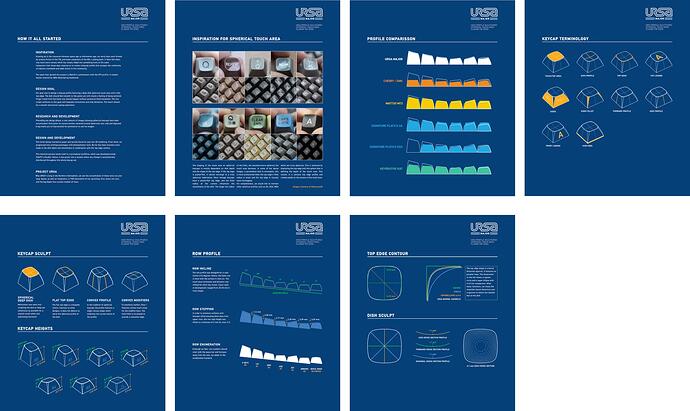 HOW IT ALL STARTED

Growing up in the crossover between space age to information age, our early days were formed by science fiction of the 70s and home computers of the 80s. Looking back, it feels like there was much more variety which has slowly faded into something more of the same.

Computers from those days inspired us to create a keycap profile that escapes the conformity of industry standards and adds choice to the community.

The spark that ignited this project is Matt3o’s achievement with the MT3 profile. A modern keyset inspired by IBMs Beamspring keyboards.

Our goal was to design a keycap profile featuring a deep dish spherical touch area with a flat top edge. The dish should feel smooth to the palms yet still create a feeling of being centered. Finger travel from the home row should happen without excessive hand movement. The row sculpt conforms to this goal with bespoke inclinations and step distances. The result should be a smooth and precise typing experience.

Preceding any design phase, a vast amount of images showing spherical keycaps have been accumulated. Discussion on various forums centered around sphericals was read and digested. A big thank you to Chyrosran22 for permission to use his images.

The initial design started on paper and quickly found its way into 3D modelling. From there, we progressed into printing prototypes with photopolymer resin. By far the most revisions were made to the dish depth and smoothness in combination with the top edge contour.

This iterative process lends itself to a procedural workflow, which was developed inside SideFX’s Houdini. Hence, it has grown into a system where any change is automatically distributed throughout the whole keycap set.

Why URSA? Living in the Northern Hemisphere, we see the constellation of these stars all year long. Space, as well as Computers, is THE fascination of our upcoming. Also, bears are cool, and the big dipper has a prime number of stars. 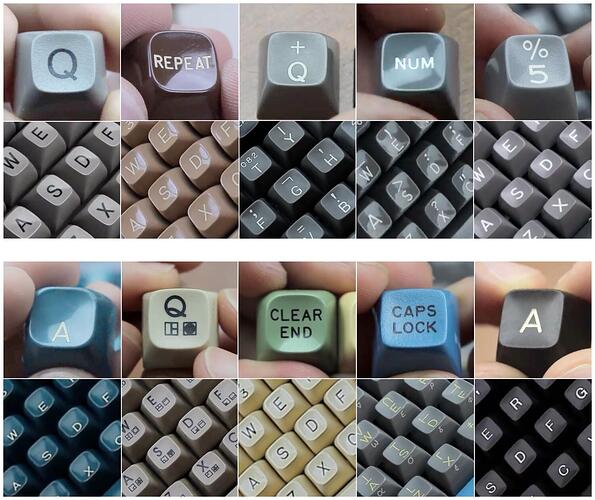 The shaping of the touch area on spherical keycaps is mostly dependent on dish depth and the shape of the top edge. If the top edge is planar/flat, it cannot converge to a truly spherical indentation. Most vintage keycaps have a planar/flat top edge, and the fillet radius of the corners influences the smoothness of the dish. The larger the radius of the fillet, the smoother/more spherical the touch area becomes. In some of the above images, a pyramidical dish is noticeable, this is more pronounced when the top edge’s fillet radius is small and the top edge is visually more rectangular.

For completeness, we would like to mention other spherical profiles such as SA, DSA, MDA which seem truly spherical. This is achieved by displacing the top edge with the sphere that is defining the depth of the touch area. This results in a concave top edge profile and creates peaks at the corners of the touch area. 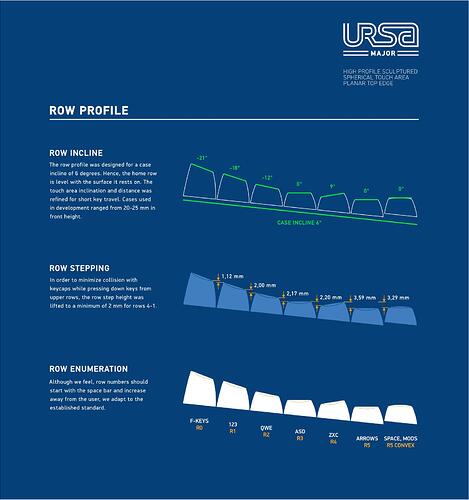 The row profile was designed for a case incline of 6 degrees. Hence, the home row is level with the surface it rests on. The touch area inclination and distance was refined for short key travel. Cases used in development ranged from 20-25 mm in front height.

In order to minimize collision with keycaps while pressing down keys from upper rows, the row step height was lifted to a minimum of 2 mm for rows 4-1.

Although we feel, row numbers should start with the space bar and increase away from the user, we adapt to the established standard. 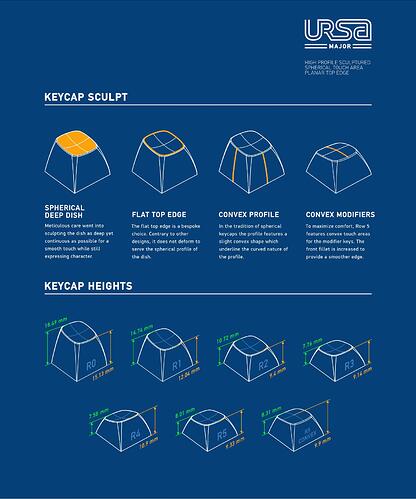 Meticulous care went into sculpting the dish as deep yet continuous as possible for a smooth touch while still expressing character.

The flat top edge is a bespoke choice. Contrary to other designs, it does not deform to serve the spherical profile of the dish.

In the tradition of spherical keycaps the profile features a slight convex shape which underline the curved nature of the profile.

To maximize comfort, Row 5 features convex touch areas for the modifier keys. The front fillet is increased to provide a smoother edge. 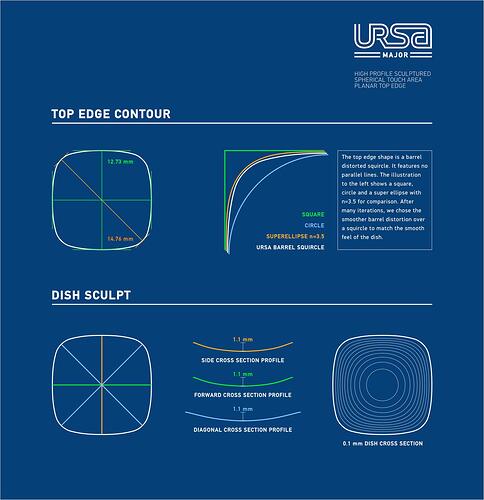 The top edge shape is a barrel distorted squircle. It features no parallel lines. The illustration to the left shows a square, circle and a super ellipse with n=3.5 for comparison. After many iterations, we chose the smoother barrel distortion over a squircle to match the smooth feel of the dish. 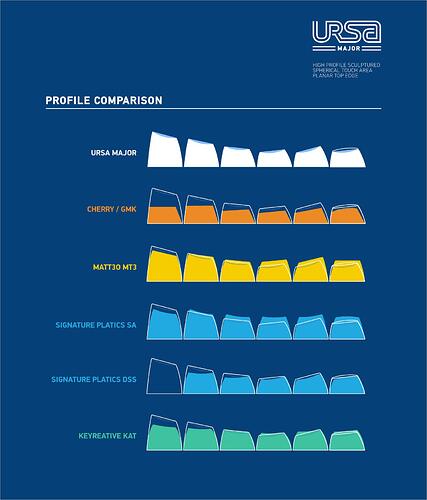 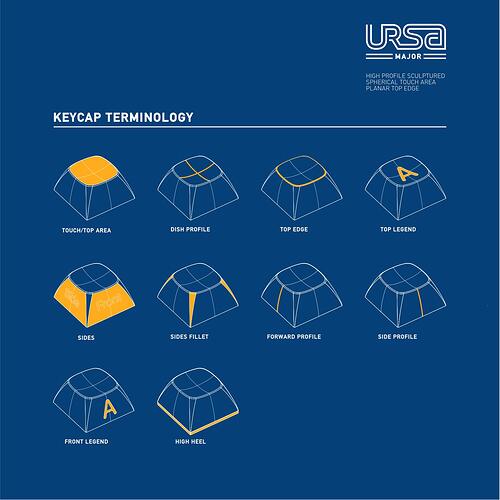 Stay tuned — photos of prototypes coming up next

In the meantime have a peek here.
Thank you for your time and as always have a great day.

This is totally awesome. I’m excited to see this come to life!

These are such lovely illustrations!

Are there any current plans for a production run of this profile? Whether it be by a larger manufacturing making molds and producing the keycaps, or allowing users to purchase files to print their own keycaps?

Thank you for the kind words.

I have not put much thought into a larger production, simply because I have no experience with vendors or manufacturers. The idea of print files is interesting, since I can feed my system with legends designed in Illustrator. This way, top legends are totally customizable in fonts and such.

One thing I don’t see discussed here is the skirt height. That is a very important facet to me and MT3 does it well. Many keyboard designers create bezels that meet the bottom of Cherry profile perfectly. When you put DSA or ePBT caps on the board, the switches show between the edges of the board and the keycaps. Any plans to provide a longer skirt for better coverage?

If I understand correctly, this refers to what I describe in the terminology section as high heels, right? If so, I have it setup as an option, as I haven’t paid close attention to it. But I do see the gaps you mention depending on the case and the depth of the plate.

Currently, the system can extrude the bottom edge down if wanted, the depth is adjustable. But I haven’t had much time to experiment with it.

Thank you pointing this out — it’s on my list to explore.

One last post for the night. From what I can find, these are the first photos from print made back in June 2021. Back then I was still experimenting with cylindrical vs. spherical and a mix of both. Hence, the Cx and Sx legends. I don’t recall the Px

Edit: a lot has changed since then. 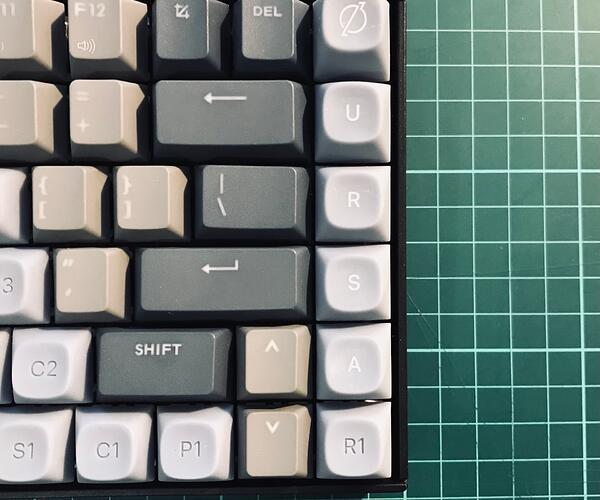 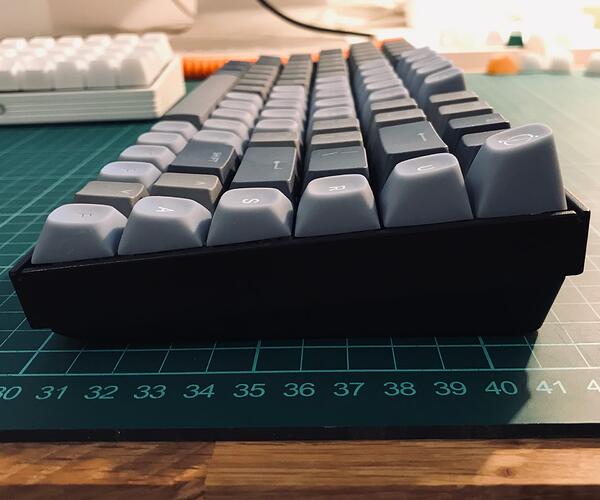 This is a really exciting project - I hope to be typing on it someday in the not too distant future.

I do see some similarities between this and matt3o’s new profile, but I see plenty of distinctions, too. I think there’s room for at least two more thoughtfully-designed spherical profiles in the custom keeb space.

Good Morning. The question of an URSA Minor has come up

Yes, the project started out as a low keycap profile. I initially struggled with the front and side profiles, so I raised the height to please my aesthetics and ended up with a high profile.

Since then, I’ve learned a lot and came back to the lower profile. So here’s a snapshot of the two siblings. I’ll update the documentation on the weekend to reflect URSA Minor. 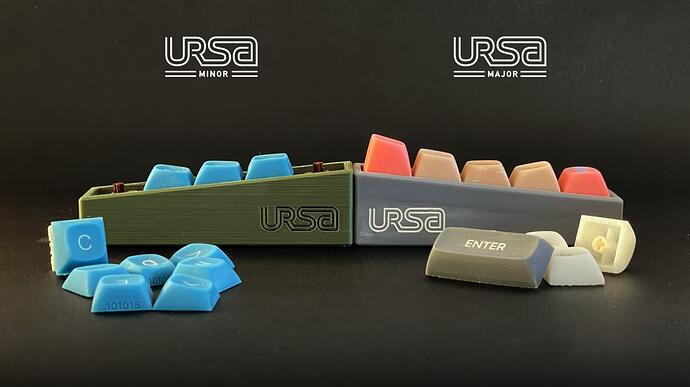 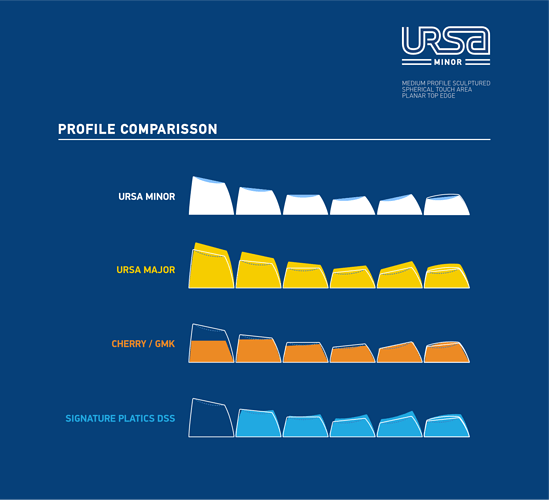 Yeah, I like URSA Minor more than URSA Major. But pls use deeper dish on SDF and JKL. They’ll feel great and eliminate the need to add notches to F and J. Deep-dishing just F and J is not effective enough.

Thank you so much for your kind words and encouragement.

You seem to have an eye for the attention to details that separate the two profiles.

Nice, please could you make sure that they are compatible with Kailh Choc V2 low profile switches?

For instance SP SA works fine with these switches while other sets may have problems with one row or so. They are to tight on the inside and kind of hits the switch housing when pressed.

I’m trying to lower the front of the keyboards and using a low profile switch shaves off a few precious mm.

I think I have a handful of v2 Reds lying around. I’ll check, when I get home.

Have you ever encountered interference issues with deep dish? I stopped using my DSS deep dish homing keys because I was getting a distinctly different sound (indicative of some sort of interference).

Unfortunately, I don’t remember which switches, but it might have been on an R2 RGB (Topre) or Bobagums.

Have you ever encountered interference issues with deep dish?

Thankfully nope. I dislike DSS bc they’re thin and expensive.

I see. DSS does seem to be pretty hit-or-miss. I’m in the like ‘em camp.

Andreas, since DSS and URSA looks to be similar heights, deep dish interference testing might be a good idea, at least on popular switches—only if you haven’t already of course